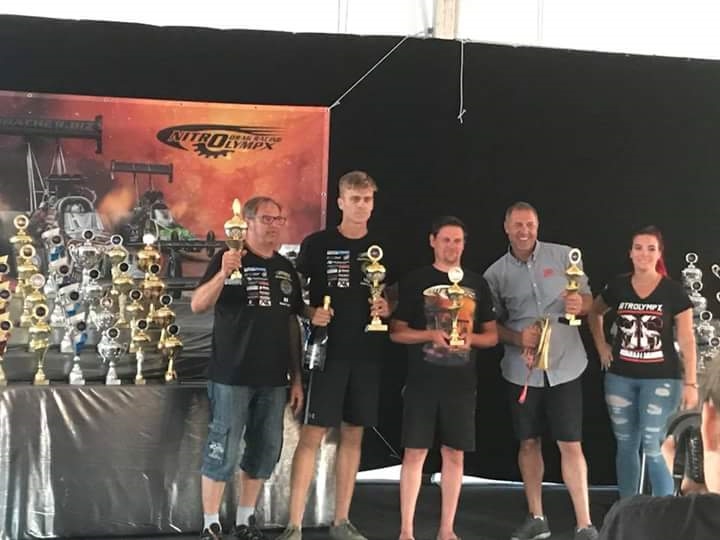 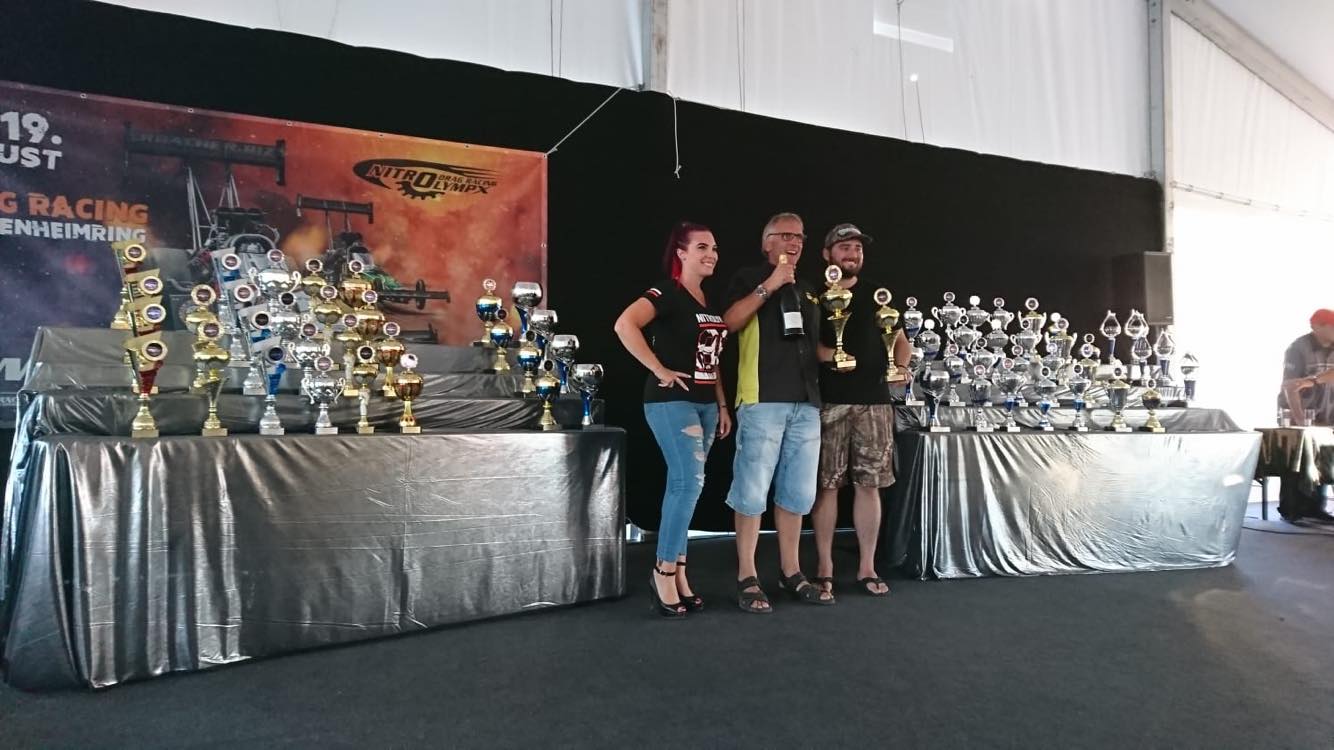 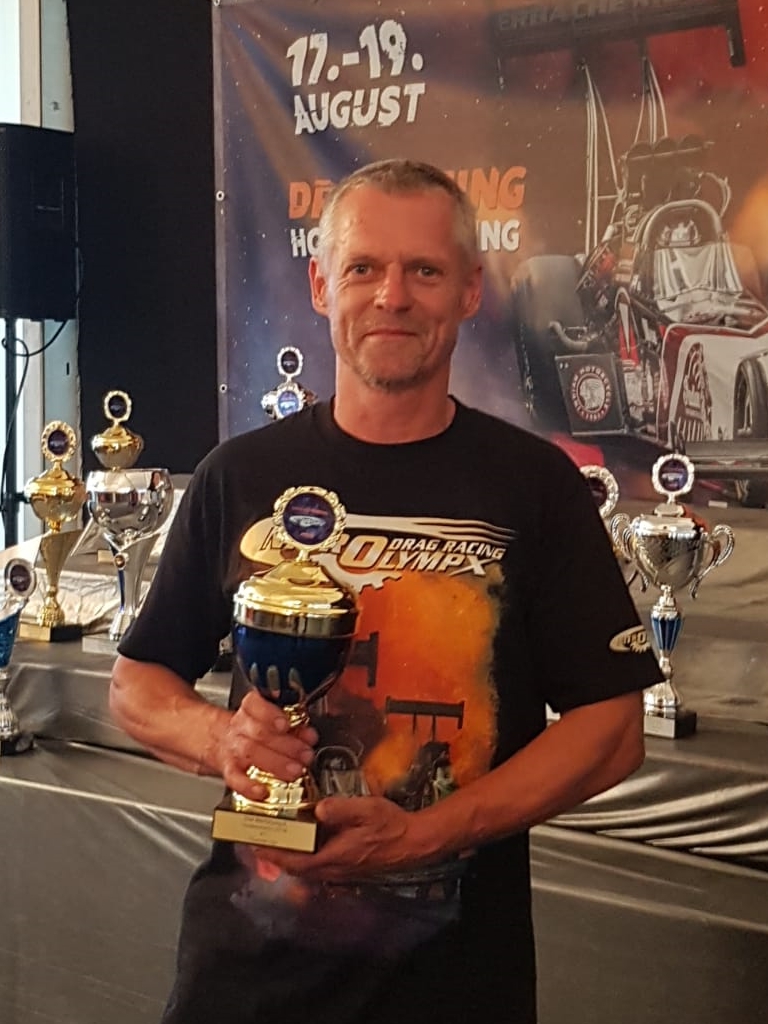 Picture by Team Redline and Richter 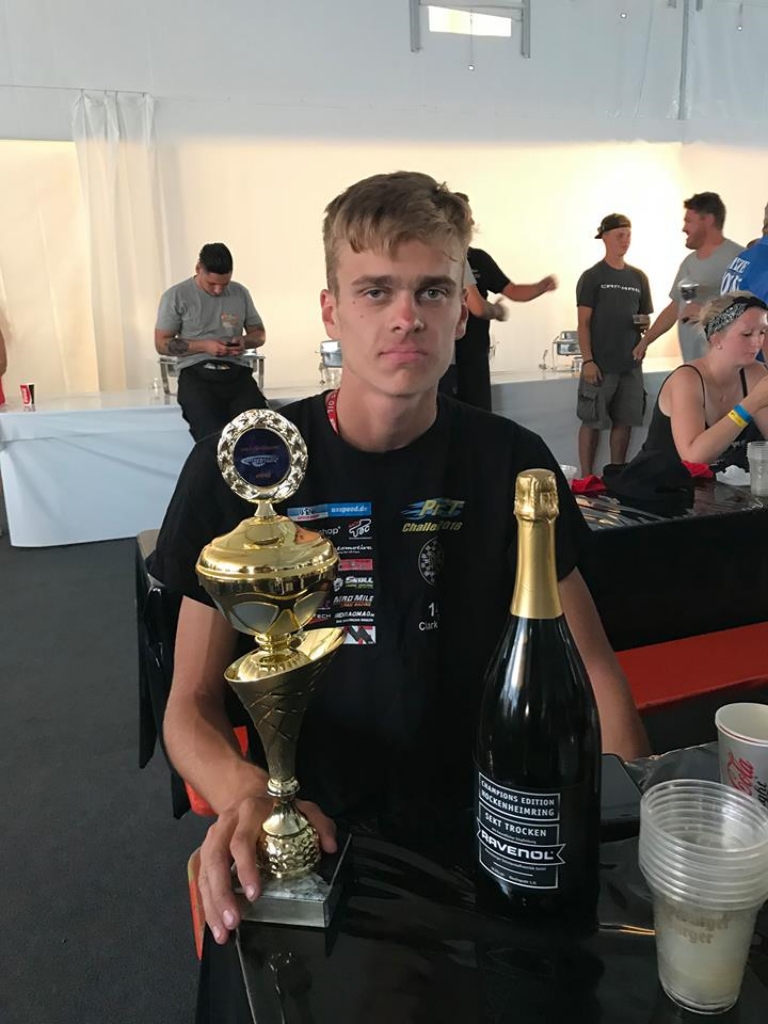 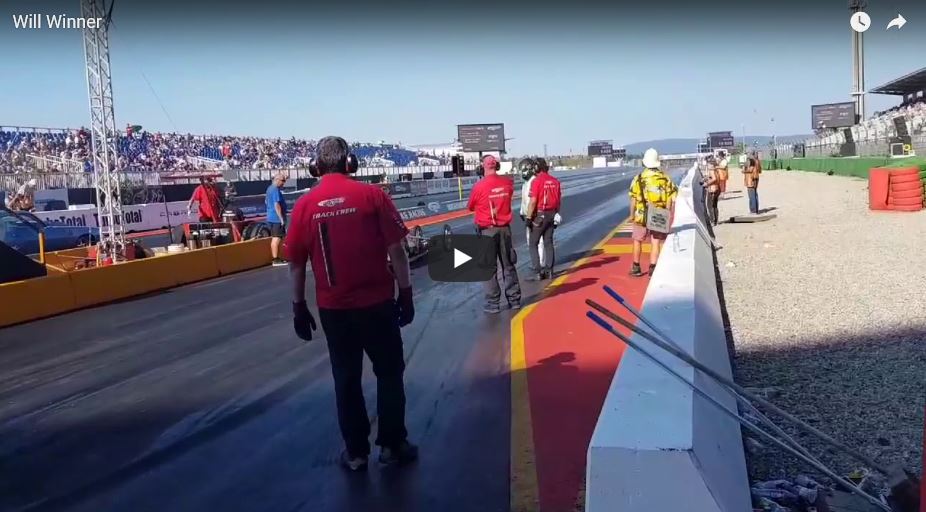 Picture by Pat Weidman and Video by Jack Topliss

ProET
The highlight of the year, the biggest event in Europe, is history. In the best weather, at the T & T weekend before, we had already the time to tune the cars and collect data. At the same time, the Nitrolympx is also the last run of the Pro ET Challenge. Martin Weikum and Janine Hagen are on top in the overall standings. Who will do the race?

Friday
The first qualifying is "tricky". The track was still cold and so many had to deal with traction problems. Only the first four (all challenge participants) managed to run under 1/10s to the dial-in. In the second run was already more temperature in the top groomed track, the planned third qualifying race had to be canceled in the afternoon because of light rain.

Saturday
Early at 9 o'clock it went on with much better conditions. The first qualifying rank with + 0,007s, Will Clark was unbeatable in his dragster. Behind him are Beranger Pudil, Phillip Thurnher and myself (Uwe Kindich). At the other end, just so, still qualified, Karl Geiger with the COPO-Camaro as 32nd. The fourth run has been canceled, so the final qualifying list is after Q3.

During the qualifying, there were already some technical failures to complain: Last year's winner Gino Bernadine had gearbox problems. When they were fixed, the turbo said goodbye. DNQ !!! Torben Wolf was able to start again thanks to the great help of many friends after the engine damage in Jade. Unfortunately, then his gear crumbles. Andre Nahler's beetle engine had sucked in a rock that permanently deformed a valve. Stupidly took also the camshaft drive damage. A suitable spare part was not to get fast, so "knock-out" for the next air-cooled.

In the first elimination
There were plenty of red lights. Unfortunately for me against the Swiss Josef Schmidig. Janine showed Karl Geiger, Herbert's taillights. Early end for the runner-up from 2017. Björn Sczendzina finally had grip with new slicks and came in the second round. Jill Kemp, who started her first test drive with Dad's car in Hockenheim after the first test run in Jade, kept going. The leader of the Challenge Martin Weikum could not finish as usual. Surprisingly early off for the otherwise constant Camaro.

In the second round
Will Clark sent the beetle driver Dirk Kunold on the trailer, top performance of the "Juniordragster" with Hayabusa engine. Jill Kemp has overslept the start and drove break-out against Stephane Caruso. Phillip Thurnher bit his teeth at Keith Herbert. End of work for the Old-Crow Nova from Vorarlberg. Til Schöninger could not control himself at the traffic light either and gave the victory with his redlight, Pudil. Frank Römer drove confidently with 0.05s RT and 13 thousandths on the index safely into the quarterfinals. Hats off! Björn Sczendzina delivered Miss Two-thousandths "a hell of a dragrace" as he said. The Schumann team choose a high dial-in and probably tried to play with the opponent. "Lucille", that's the name of Björns Camaro, but played better. So Janine missed the chance to be the first woman to win the ProET Challenge. And Herbert could have been the first victorious non-Camaro. Maybe 2019?

Quarterfinals:
Will Clark continue with incredible ease against Caruso. Lee Huxley prevails in the all-British duel against Keith Herbert. From there it is also about prize money. Unfortunately not for Lucille and Björn. Frank Römer performs better in the Camaro duel and is still alive. The two fight with Madame Zweiausendtsel in the DMSB Drag Racing Cup for the places behind Gerd Habermann. However, this Gerd lost every chance for cash at the traffic lights. A red cherry to Erlensee. And because that's not enough, the V8 two-seater dragster disassembled the engine after 50 meters. Not a happy weekend for him. Pudil continues without a fight.

Semi-finals:
Will Clark and Lee Huxley start with identical RTs, the race will be decided by 1/100s. Insanity show of the Englishman with the better end for the little dragster. The second semi-final will be decided by red light. Frank Römer despite breakout in the final. Beranger Pudil has to settle for Semifinalist.

Final:
Like all weekend William Clark has the traffic light under control and leaves Frank Römer only the title "Runner-Up" Congratulations to the winners! Top qualifier and victory. Well deserved, great job!

Amazingly, for the second time in a row a 4-cylinder won the Nitros.
Who would have thought that?
For the fifth time in a row, a Camaro wins the ProET Challenge.

It's about time to change something.

We work on it.

Super ProET
A nice and good race. 32 entries on a 32 field. Nevertheless, everything was given in the quali to be at the forefront of the music. In the first 5 of the qualifiers were in the end 4 participants of the Super ProET Challenge. Marc Henney hit his index best with +0.003 sec. followed by Schlegel, Könnecke, Gassner and Dold.

Marc Henney was a bit unlucky this year. His rented towing vehicle was not available for the Summer Nats in Pod. He could not get a replacement, so he involuntarily skip the race. The leaders of the Challenge, Petzold and Aschenbrenner, qualified only in midfield.

The race, thrilling as it should be. For the round Dominik Reinhardt can not compete in the former Hestermann Altered, in qualifying he drove with a 6 time PB. Congratulations. Jochen "Gegge" Beck from the Hillbillys split the head of the blower engine cleanly in two halves in Q3 and ended work. Billy Everitt in Alien Altered can not compete either. I was particularly pleased to see Team "Money Blower" once again. Schuby has only been in Sweden for years, nice to see you and your nova again.

To the race. From the ¼ final (last 8) only participants of the Challenge are in the race. Fantastic, your quality. In the ¼ final, the TQ has a byerun in the semifinals. Stefan Eisenhauer says goodbye to Jens Könnecke with a red light from the competition. Billy Gane oversleep at the traffic lights and therefore is Alex Halter still in the semi-finals. The exciting duel of the first and second of the Challenge follows just in this round. Excitement, Oli Petzold, or Franz Aschenbrenner, who is expanding his lead, or who will catch up? A very tight run, but second in the Challenge, Camouflageminister Aschenbrenner wins at the traffic lights and on the track against Oliver Petzold in a very close race. The track is free for the Bavarian Aschenbrenner to take the Challenge rating. For this he has to win the NOX.

Semifinals. Henney against Könnecke, the Erlensee Henney in his ethanol Guzzler can not wait and drives a .005 seconds red light. The East Frisian in the final. Against whom only? Against the winner of the duel Halter against Aschenbrenner. Drama and excitement after the burnout. Alex's teammates are shocked to find that the wheelie bar on the right side of the Schweitzer Mopar is dragging on the ground. It is broken off, the much-used iron device of the black nitrous oxide bomber. After a few seconds it is clear that Lex can not drive with it. Pushing back and finishing work. Like last year, the NOX for the Swiss team ends in the semi-finals. Franz Aschenbrenner drives into the final.

Ostfriesland and Bavaria may have little in common at first glance, but here they meet on the track. If Franz wins, he is ranked 1st in the Challenge, if not 4 points behind Petzold. Aschenbrenner with a better start, but not as desired. The red light shines on his side and Jens Könnecke wins the NOX 2018. Congratulations, "well deserved". This leaves Petzold with 4 points ahead of Aschenbrenner as leader in the Challenge, Könnecke now in third place.

Simon Rudiferia has sold his yellow Mustang as planned and can thus no longer intervene without racing cars in the action. I'm curious what the team gets as a new toy. It was clear, it should be faster and dad Kurt wants to get behind the wheel again.

I'm curious who this year goes on the track ... or if it stays that way.

Extreme Outlaw
Another milestone has been reached.
The new class Extreme Outlaw could now officially participate in the Nitrolympx.
The team Knight Rider with Karl-Heinz Kleider, MSDR Andorra Dragracing with Bernard Saz, Team Bellabomb with Frank Richter, Walle Strobel Racing with Walter Strobel and Team Redline Motors with Carmen and Peter Ritscher have started.
Already on Friday Walle had to throw in the towel in his black Camaro, because a connecting rod quit the service and left a devastating crumb soup in the oil pan. 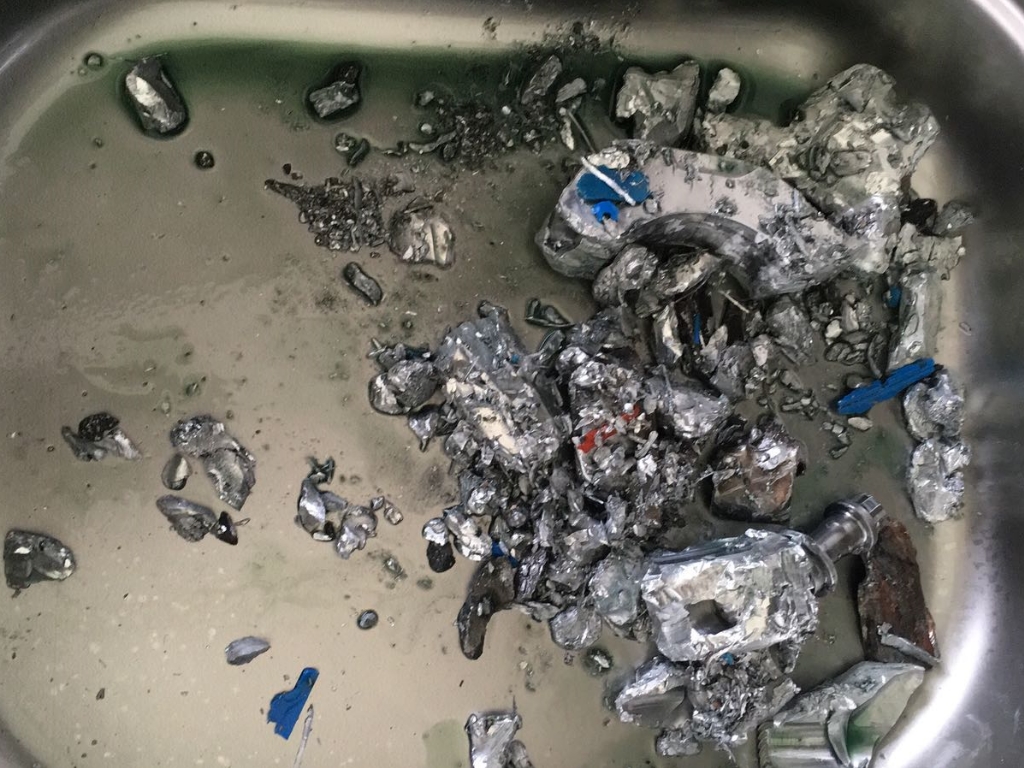 There were only 5 left
On Sunday, Bellabomb, the Borgward Isabella of Franky at the last Cannonball run due to a leaked spark plug and chips in the oil filter could not compete unfortunately.
But at the Cannonball this is not an "knock-out", you are within the ranking till the last run and finally the collected points decide.
It was a successful weekend despite the two failures, two qualifying and three elimination runs Extreme Outlaw recorded. For the first joint appearance at the Nitro's a great success.

PS .: On the 27th of October we celebrate the winners of our challenges. All teams, friends and fans are invited to the party.
You can find more information here.
And - please do not forget to sign up! 27. Oktober feiern wir die Sieger unserer Challenges. Zum Fest sind alle Teams, Freunde, Bekannte und Fans eingeladen.