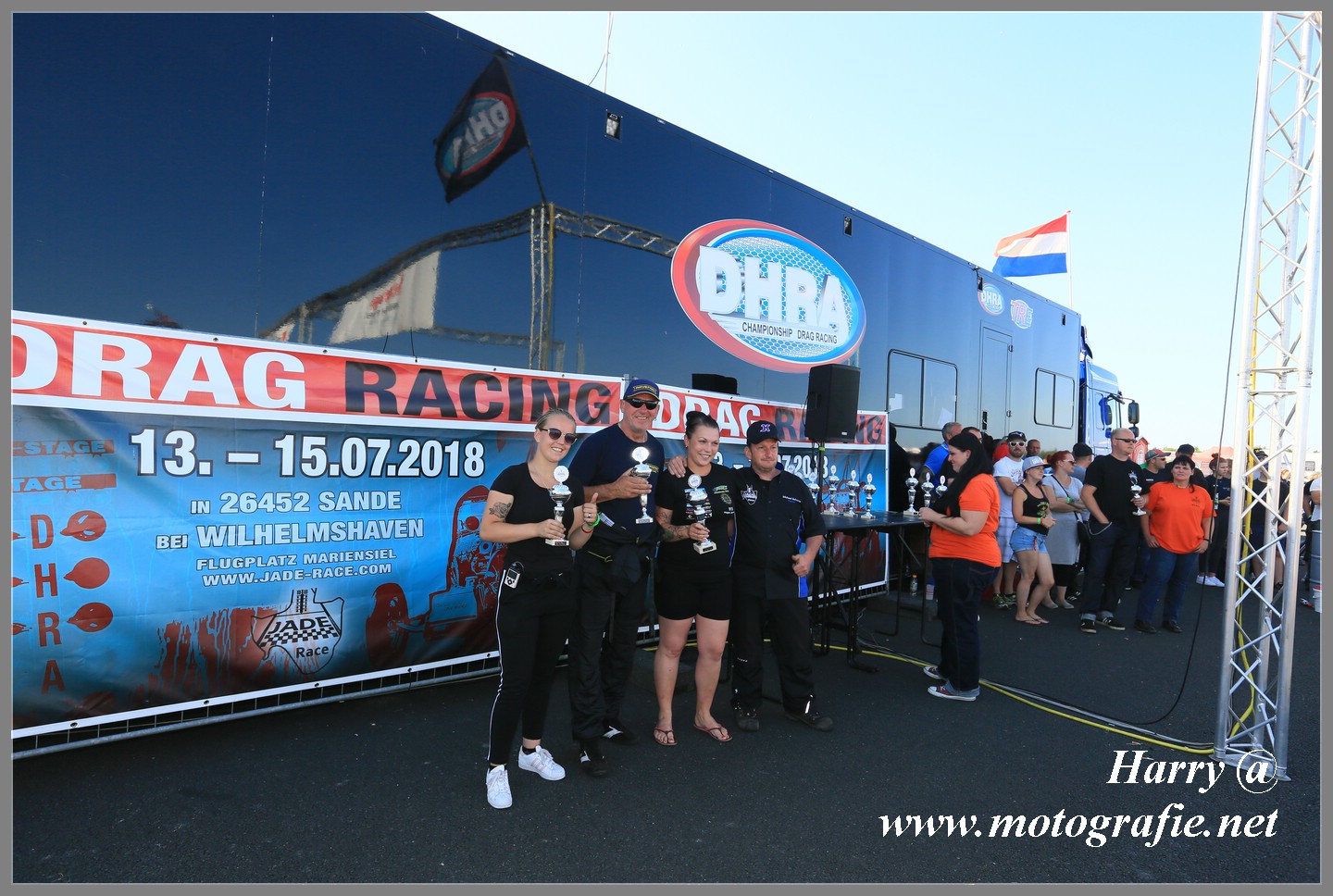 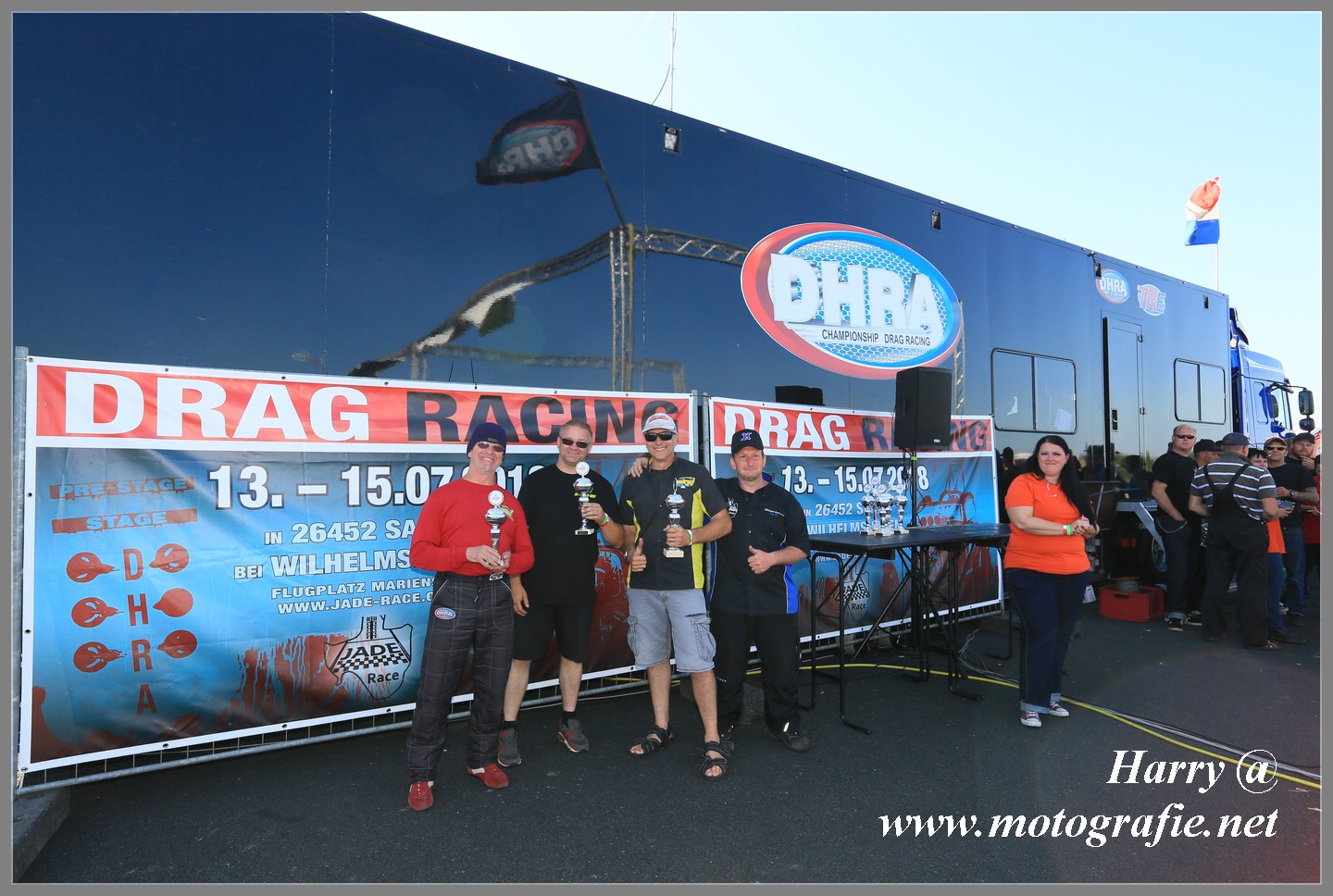 Congratulations to the winners

This year, I cannot report in such detail, because I was not only as a spectator but also as a driver on site. Thursday we were able to build up to the paddock before sunset and everything to relax on Friday. After the technical inspection was started at about 15h not with free training (as originally announced) but immediately with the first qualifying round. It should be five or six. Have a little lost the overview.

Saturday went on exactly like that. Round by round was started. No (or only short) interruptions. Tracktime without end! The organizer had joined the class ProET with a Dutch bracket class, which although the index was extended to 9-13.9s, but nearly 30 starters went into qualifying. Due to the many qualifying runs it was narrow on the list. Without zero after the dot, for example, Torben Wolf with 0.113s to the dial-in did qualify only as 14th. But for him, the race was already over, because on Saturday at short notice, the state of matter of a cylinder head changed from solid to liquid. Beyond repair. End of working day! Other Beetle drivers had technical problems or enrolled in other classes. Unfortunately, Manni Grässer and Thomas Kemp were not with us. Quite different Bastian Rosenkötter. With his clean-set Dodge Coronet he drove in the third run of his life with 11.04s on the 11.0s index right up front. In the fourth race, the first 10 and on Sunday even the first Eli round won. Respect. Everything done right you have, young Padawan. At the end of the day, Janine Hagen from the Schumann Racing Team was in the "pole position". "Madame two thousandth" had shown everyone where the hammer hangs. Behind them plenty of Dutch participants. But the Challenge participants were in wait.

Unfortunately, there were also other failures and technical problems: Also on Sunday: Jörg Boenisch could not participate because of carburetor problems at the elimination. Bye-run for me, as well as for Janine with her Benz named Herbert. Uli Kegelmann's red pick-up did not want to start at the pre-start for the race against Til Schöninger. So Bye-run for the right-hand drive Honda with US-heart from the Oberpfalz. Frank Römer sent Björn Szczendzina on the trailer, whose slicks had long since had to be replaced. Up to the Nitros he has new and hopefully again traction. Bastian Rosenkötter won easily, as his opponent Dominik Reinhard missed his index by just under 3 seconds. Jürgen Frank was already out in the first round with an 8 thousandth of red light. That's racing.

In the next round "Madame two thousandth" kicked out Til Schöninger. Which did not stop the two of them from taking a selfie before repatriation. 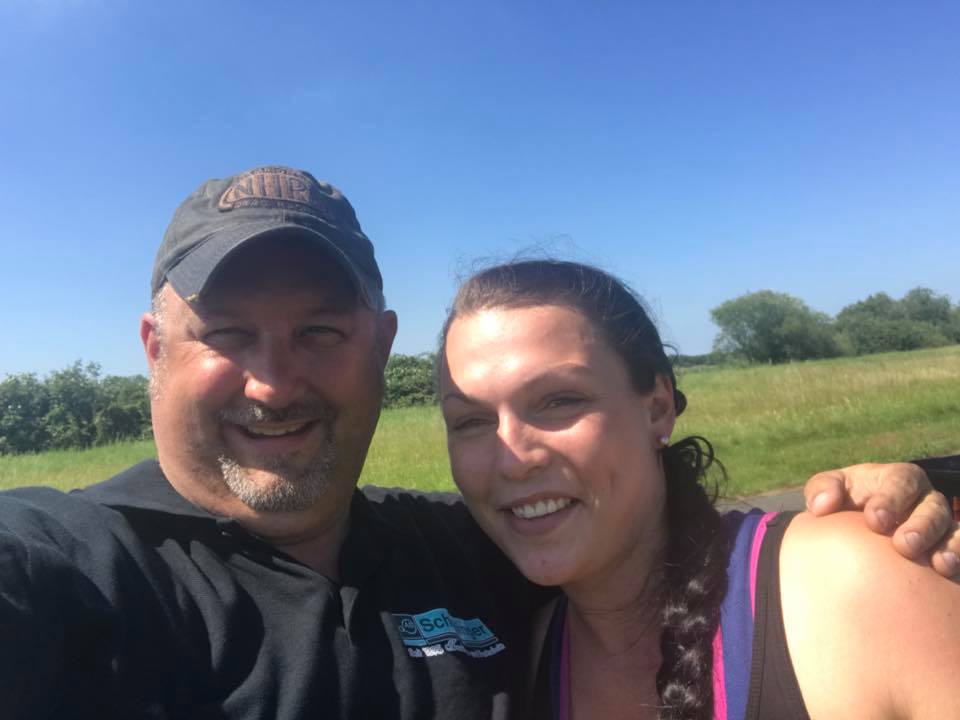 That's the way it has to be: opponents on the track, friends in the paddock. For me after the race against Frank Römer also concluded: 6/100s too fast. Frank with the better RT and 0.095s to the index won - congratulations! Petra Held won her round against Volker Gerken. Bastian Rosenkötter had already given up. He was "through" as he said and headed home. His opponent Janita Kempenaar continued without a fight.

In the next round she had to show more in her "Pink Indian" Pontiac. But she also won with very good RT. Janine Hagen defeated Frank Römer, who this time could not deliver zero after the dot at the reaction time. So you do not win against Herbert and Janine.

In the next round Gerd Habermann had a bye and drove without opposition to the final. Janine Hagen showed how to do it in the women's semis Janita Kempenaar and concentrated on the last race of the day against the two-seater Dragster from Erlensee.

Only he did not appear. Gerd Habermann did not want to drive in the right lane, although "Miss Two-thousandths" had Lanechoice. Since the professional probably has to study the rulebooks again. So Herbert drove his charming chauffeur despite (or because of Pussyalarm) safely the highly deserved victory.

Top qualifier and victory in Jade, very good record.
Congratulations to Team Schumann from the wild East of the Republic.

And of course many thanks to Micha Behrens and his jade race team for the great weekend!

We return to the connected broadcasting companies and see each other at the next race.

Here is the Eli Flowchart

Here is the ProET points calculation